Act I – The arch-enemy (A brief history of immigration detention) 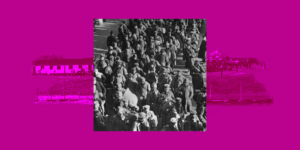 Act I – The arch-enemy

In 1915, against a backdrop of war, xenophobia and panic, the British government ordered that all German and Austrian men of military age be ‘interned’ for the remainder of World War I.

The scale was huge. By November 1915, over 30,000 people had been interned in camps, mostly on the Isle of Man, and others dotted around the country including Lofthouse Park near Wakefield.

This can be seen as the earliest modern iteration of immigration detention – not detention for the purpose of removal from the country necessary, but mass confinement of people on the grounds of nationality, for administrative, ‘preventative’ purposes. This practice continued during

WWII. By June 1940 some 12,000 of those seen as ‘enemy aliens’ have been interned in Britain. At this point, the indefinite nature of detention – the marker of our current system – was noted as a significant problem. One man recalled how time was the ‘arch-enemy’ of interned people.

Coming up tomorrow – Act I: what happened when Harmondsworth and Campsfield detention centres opened. Matthew Leidecker on the early days of immigration detention as we know it today

Act I: The arch-enemy

Act II: The beginning of detention as we know it >>>