×
/ News / Act II: The beginning of detention as we know it (A brief history of immigration detention)

Act II: The beginning of detention as we know it (A brief history of immigration detention) 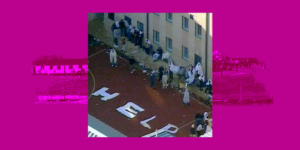 Act II: The beginning of detention as we know it

The first time I went to Harmondsworth immigration detention centre I saw a man who, in an act of desperate distress, had stitched his lips together. Harmondsworth looks like a warehouse from the outside, a huge warehouse for human beings that’s covered with barbed wire. The level of vulnerability in every person I saw that day, and every day since, was astounding. It was a glimpse into the crisis of harm that’s unfolding behind closed doors, with thousands of people trapped in a system that largely answers only to itself.

The following year, the 1971 Immigration Act outlined powers to detain. It said that people could be detained in order to examine their immigration status or facilitate their removal from the UK, but imposed no limit on how long detention can last and failed to establish a mechanism for meaningful oversight by judges.

Without clear safeguards on who could be detained and for how long, detention continued to expand without much restraint during the 1980s and 90s.

“The UK has become addicted to detention.” one of the members of Freed Voices put it to me recently, “in 1993, it was exceptional to put someone in detention. In 2019, it is exceptional as a migrant in this country to not experience detention, in one way or another.”

Campsfield House detention centre opened in 1993. Protesters greeted a van bringing the first group of men to be detained at the centre, and the eventually successful campaign to close it began in earnest. In Campsfield’s first year as a detention centre, twelve Algerian men staged a mass hunger strike to protest conditions.

This is the beginning of the detention system we see today. Powers to detain were set down, and remain relatively unchanged. The opportunity to include meaningful limitations and safeguards was missed, setting up the next phase of the system’s development – and ultimately the situation in which we find ourselves today.

Coming up tomorrow – Act III: detention rebranded, capacity quadrupled, and the net cast wide, with disastrous consequences. Mishka from Freed Voices talks about the era of expanding detention during which he was held.

Act II: The beginning of detention as we know it