×
/ News / Act III: From exception to routine (A brief history of immigration detention)

Act III: From exception to routine (A brief history of immigration detention) 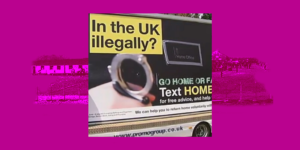 Act III: From exception to routine

Like all my fellow Freed Voices members, I was held in indefinite immigration detention in the UK, and have seen the inhumanity shown to human beings in the name of ‘immigration control’.

At a recent meeting of Freed Voices, the campaign group I’m part of, we added up the number of years our members have lost to immigration detention. With only a handful of us in the room, the total was 14 years. If we’d all been there it would have been far more than 20.

I was held in Harmondsworth at a time when detention in this country was expanding rapidly, fuelled in part by rising anti-immigrant sentiment. We now have a system that’s got used to being able to act largely as it wishes, with blurry self-policed lines between necessity, convenience and cruelty.

A key period in the development of this system began in 1999 and peaked in 2015 – an era of expansion without precaution, and not much public scrutiny of what was going on behind closed doors. Crucially, this is the time when the use of detention went from an exception to the routine.

Here’s how it happened:

In 1999 the Immigration and Asylum Act expanded immigration detention, quadrupling capacity to 4,000. Looking back, this is often seen as the moment government policy shifted from detention as an exception to detention as routine.

Home Office guidance published in 2000 talked of detention with ‘reluctance’, but a gradual and significant was well under way which eventually resulted in the commitment to detention ‘as a last resort’ being removed from the latest guidance altogether.

Under New Labour, in 2001, detention centres were rebranded as ‘Immigration Removal Centres’ (IRCs), and expansion continued to gain pace. In May 2008, the government announced it intended to increase the capacity of the detention estate by 60%. In pursuit of this goal, Brook House opened in 2009, completing an 11 centre strong detention estate

The number of people held in immigration detention peaked in 2015 at a staggering 32,744 people over the year. During this time, still with no limit on how long a person could be held, very long detention was commonplace.

Rapid expansion in numbers was not accompanied by the development of limits or safeguards or judicial oversight, nor did it seem necessary in the majority of cases. The net was cast wide. Survivors of torture and trafficking, people with serous mental health problems, asylum seekers, and people who had lived in the UK for most of their lives were detained for indefinite periods of time.

Then, as detention peaked, public scrutiny arrived. The first ever public review of immigration detention was conducted by Sir Stephen Shaw in 2015 (later followed up in 2018). Shaw raised grave concerns about the physical and mental health of those held in immigration detention. He found that thousands of vulnerable people are being locked in “unacceptable” conditions in our detention centres.

Coming up tomorrow: Act IV – detention in the spotlight, serious abuses uncovered, and the best chance ever for fundamental reform emerges. Detention Action’s Izzie McIntosh looks at the remarkable ways in which immigration detention has come under scrutiny in recent years.

Act III: From exception to routine