×
/ Publications / Indefinite detention and deportation to Somalia
Skip to PDF ↓

Indefinite detention and deportation to Somalia

Hundreds of people from Somalia have been indefinitely detained under immigration powers in the UK. Having fled a war-torn country in which human rights abuses are endemic, often as children, they have spent years in the UK, becoming part of their local communities. Many are British but for one piece of paperwork. Somalia has been so dangerous for many years that both the European Court of Human Rights and the UK courts have ruled that it is not safe or lawful for the vast majority to be returned there. However, the UK and other EU states have recently begun to explore restarting forced deportations to what is still one of the most dangerous countries in the world. A recent judgment from the European Court of Human Rights that the security situation has improved may well give momentum to this drive,1 despite warnings from observers like the United Nations High Commissioner for Refugees (UNHCR) that it is still too dangerous. 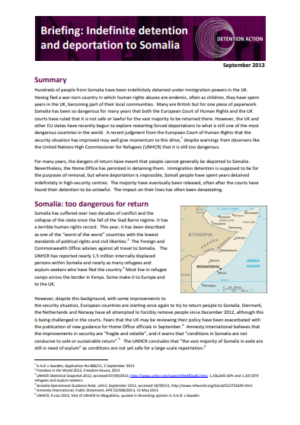