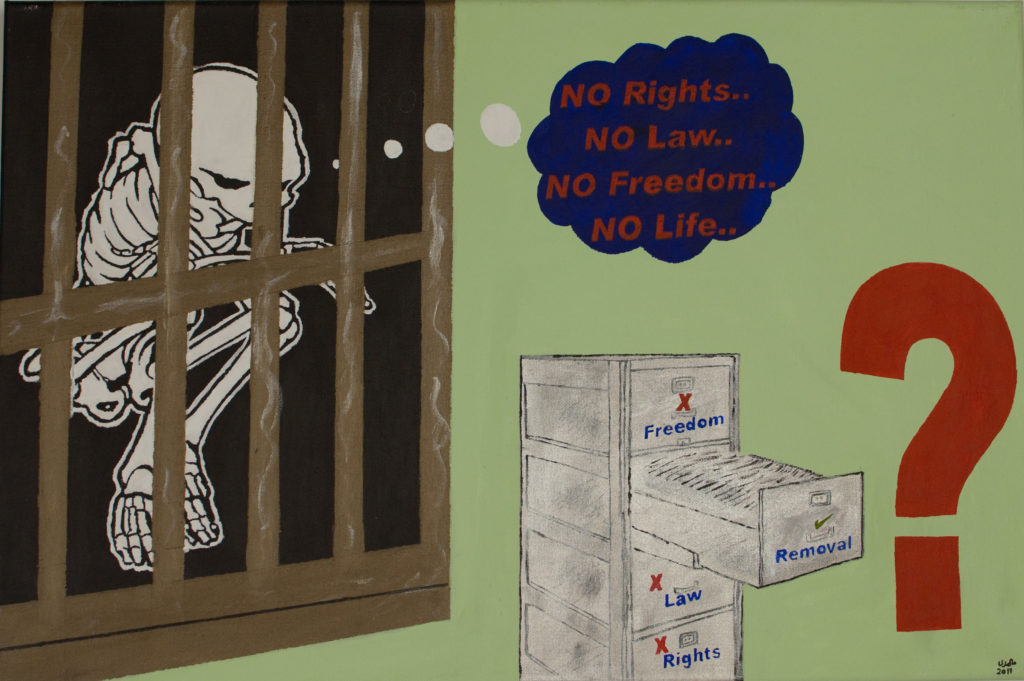 There is no statutory time limit on how long someone can be detained for immigration purposes in the UK. This is not only a fundamental breach of human rights, but underpins the UK’s entire approach to immigration detention.

The indefinite nature of detention allows the Home Office to detain people who have no realistic prospect of being removed from the country. It means that people detained under immigration powers following a prison sentence are punished twice. It means people can be detained at any moment, released, and detained again on a whim, through no fault of their own and with no change in their immigration case.

Along with a wide range of civil society and political organisations, we are calling on Parliament to urgently introduce a strict statutory time of 28 days. It’s #Time4aTimeLimit.

The decision to detain someone for immigration purposes is an operational decision made by the Home Office. Anyone subject to immigration control is liable to be detained and people are detained without the approval a judge. Once in detention, people do not know if they will be removed from the UK or released back into the community. People in detention are able to apply for bail, which can be granted by a judge or the Secretary of State, as long as they haven’t had an unsuccessful bail application within the last 28 days.

While in detention, people are often cut off from support networks including friends, family and legal representatives, which unfairly inhibits people from building their legal case. There are regular legal surgeries held within the detention centres, at which people are able to receive 30 minute appointments with a solicitor. At any one time, only around 50% of people in detention have legal representation.

The safeguards against detaining people who legally should not be detained are woefully ineffective. Survivors of human trafficking, modern slavery and gender-based violence are routinely detained. Multiple children have been taken in to care as a result of an adult being detained. The government’s approach can too often be described as ‘detain first, ask questions later’.

The ineffectiveness of these safeguards lead to many people being detained unlawfully. The scale of the problem is shown by the fact that the government has paid out at least £21m over a five year period.

“This country works hard to sell an image of liberty, democracy and justice. Experience immigration detention however, and you will soon find out how commonplace human rights violations are in the UK. Hidden behind their prison facade, detention centres are a perfect example of British hypocrisy in action.”- Mishka, expert-by-experience

The reality of hotel accommodation for many people seeking asylum: "Lying on a thinly carpeted floor, 13-year-old S… https://t.co/aZfpmFJ2NV

Bella Sankey, director of Detention Action, said: “If this Government had any respect for our legal system, it woul… https://t.co/jCOlbNhOd6

The most senior Home Office civil servant claims today that the #Rwanda policy is about "prevention". A prevention… https://t.co/BIQHD6XFLr

The Home Office's most senior civil servant admits that: "It would be a pyrrhic victory if this set of policies wer… https://t.co/nbiOh5Yy8y

“These plans to undermine our rights to a private and family life threaten us all, but especially threaten the chil… https://t.co/YhZfby6yJw

In this letter, organised by @libertyhq, we join the call on this Government to not block attempts by Parliament to… https://t.co/YIEaEmfGIQ

"They fled their villages after they were razed to the ground & family members were raped and tortured. The route f… https://t.co/3BIhQCd7eN

Take action Write to your MP and let them know why we need to end indefinite detention. Show your support on…