×
/ News / As a refugee, I know how disastrous this government’s plans will be

As a refugee, I know how disastrous this government’s plans will be

People in danger will travel in whatever way they can – this is simply the reality of being a refugee. 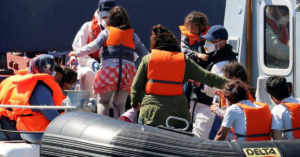 Urgent This is the biggest threat to refugees in a generation.

Please chip in now to fund the campaign to stop it..

Most people cannot understand the desperation and risk involved in having to escape.

There is nothing worse than leaving the place you grew up calling home, fleeing persecution or wars that may destroy that very home.

At last you reach a new country by narrow twist of fate. How will you be treated?

Seeking asylum is a human right – but this right is facing its biggest threat for a generation. I want to thank everyone who is standing up to protect it – to defend those for whom it is a matter of life and death.

As a refugee, I want to tell this Government that people fleeing for their lives don’t have time to fill out a form. People in danger will travel in whatever way they can – this is simply the reality of being a refugee.

As someone with a legal background, I know that no route to claiming asylum in the UK is “illegal” – this is a dangerous lie used to demonise people. It says to those in need of safety – “you are not worthy of your rights. You are not worthy of Britain’s protection.”

I want to remind the Government that going through the asylum process is traumatic.

You have left everything you ever held dear behind. You have to talk about what has happened to you with someone who is hostile and doesn’t believe you. You are constantly replaying the ordeals you had to go through to flee. You are taken to a detention centre and held indefinitely. You are treated like you don’t matter.

It simply does not need to be the cruel and inhumane system it has become.

That is what we are fighting for – together. We believe in treating those in need of safety with humanity and dignity, and in defending their basic human rights – not in turning our backs on them.

No matter the challenges, I am always encouraged and inspired when I see so many people willing to stand up for refugees.