Boris Johnson – am I not British too?

by Alice, member of the Windrush Generation and campaigner 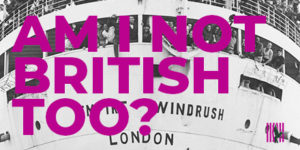 I am a member of the Windrush Generation who was invited here by the British Government. We were told we would be warmly welcomed, but instead I’ve spent most of my life looking over my shoulder, or waiting for a knock on the door from the Home Office.

The Home Office’s behaviour towards my family has been nothing but hostile. One of my sons has been deported and the other narrowly escaped deportation one year ago today.

My sons found themselves on the wrong side of the law, I accept that and so do they. But they have done their time and they should have got a chance to rehabilitate like everyone else.

The way they have been treated shows me that only certain people matter enough to be protected by citizenship, and me and my family aren’t included.

If we are black, from the West Indies, Jamaican, we don’t seem to matter or be considered as valued members of society.

The Government talks about protecting the British public, and in the same breath tears my family apart. Am I not British? Are my Grandchildren who suffer without their father not worth protection from their own Government?

Lots of people make mistakes, but the difference with our boys is that they do not get the opportunity to make amends, even though they desperately want to.

Every time my son has to go and sign on at the Immigration Centre my head hurts, and I can’t be at peace until I hear that he is back home. This is a recurring event every week. I am very concerned for the life of my son in Jamaica.

At this time when travelling is so restricted, families are unable to travel in an emergency. If something happens to him will I even be able to get to Jamaica to help him?

My children deserve to be given the same opportunities as their British counterparts, as children of the Windrush Generation, to develop their gifts and talents in order to make a valuable contribution to society and be good fathers to who are there to help care for their children.

I have cried many tears for my children over the years. At 65 years old I would like to dry my tears and watch them be who God called them to be.