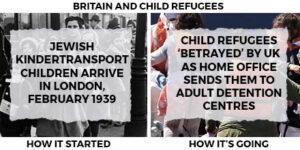 Urgent Britain once welcomed refugees – now even children arriving alone after crossing the Channel are being locked up in inhumane conditions.

Our Home Secretary is not doing well.

1. She shut down safe routes for children and families – and refuses to open new ones

With the tragic deaths of a Kurdish-Iranian family, including two small children, Anita and Armin, and a baby, Artin, in the Channel this month, we are reminded of the dangers people face trying to reach the safety of Britain in 2020. And we are reminded that many of them are children.

Priti Patel has closed down some of the last remaining safe and legal routes for families and children to this country, and refused to open new ones.

The parents of Anita, Armin and Artin had reportedly tried twice to bring their children safely to the UK by a regular route, but were twice turned away by border officials.

Priti Patel has vowed to make the English Channel “unviable”, but without proper alternatives for families like this, this just makes an already dangerous crossing even more lethal.

2. Child detention, back by stealth in 2020 Britain

Refugee children who arrive without their parents are extremely vulnerable, and completely at the mercy of the UK authorities. Reasons for children arriving unaccompanied include that they have been trafficked or that their parents are dead or were not able to flee with them.

Child detention is clearly cruel, and refugee children should be given care not locked up on arrival – that’s the law

But Priti Patel has brought back child detention by stealth.

Last month the Government’s own watchdog (HM Prison Inspectorate) revealed that during unannounced inspections they found children locked up in detention centres.

Detained children were frequently interviewed by officials in the middle of the night. Interviews made “little meaningful exploration of the children’s welfare”. In spite of the law banning child detention, a quarter of children were detained for longer than 24 hours.

People reading this should be in now doubt as to how traumatising immigration detention is. Our adult clients, already traumatised by torture, trafficking and many other things, experience serious mental health problems when detained. Sadly, self harm and suicide-attempts are a daily reality in our detention centres, and the effects of detention stay with them long after release.

Detention is no place for a child.

On 22 October 2020, Government inspectors yet again found the conditions for people seeking sanctuary in the UK not fit for human habitation. One facility was described as resembling a “rubble strewn building site”.

It was in these places that children were found.

Children were left for days without access to beds or showers and with little or no natural light.

The report – and remember this is from the Government’s own watchdog – makes it absolutely clear that these failures are not the inevitable or excusable result of a sudden rise in numbers; they are the result of the Home Secretary’s lack of care and action.

This is the brutal reality of how refugee children are treated in Priti Patel’s Britain. But there is absolutely no reason it needs to be this way – what would be a valid reason for keeping children in these conditions?

4. “They left them there like animals” – the system for caring for refugee children has collapsed

The National Transfer Scheme (NTS) is not, as its name would suggest, a system for moving cargo around the country, but the scheme set up for protecting and housing unaccompanied children.

The aim was to ensure that children are safe and that councils share responsibility so that those at ports of entry are not left with all the responsibility.

But the scheme is voluntary and not mandatory, and has been a disaster as a result. It collapsed completely in August when Kent County Council asserted that it had reached capacity in its ability to accommodate and safeguard unaccompanied asylum seeking children.

Priti Patel’s Home Office claimed immunity due to the “unprecedented situation” of recent Channel crossings. But the truth is that this is the result of an ill conceived and badly delivered system, and years of unheeded warnings.

In June of last year, London councils called it a “broken system” and warned that unaccompanied asylum seeking children were in danger of not receiving the care they need due to a breakdown in government plans to support them.

A UNHCR report, of last year, documented a “lack of planning and assessment built into the NTS” and detailed a case of two vulnerable teens who were removed from the care of their foster mother, only to be locked away in a house.

“They just dropped kebabs for them, and closed the door,” the foster mother told the UNHCR. “They left them there like animals.”

5. “Clearly a child” – the pressure for rushed age assessments

Age assessments for refugee children are incredibly complex. They need to be carried out with the utmost care and sensitivity, because the consequences of an incorrect decision can be so catastrophic for a child.

But in August of this year, the Priti Patel’s Home Office wrote to local councils encouraging them to carry out rushed age assessments. In the letter, councils were even offered money for the legal challenges to individual age assessments.

Incentivising councils to rush through age assessments is incredibly dangerous for refugee children – if it’s wrongly decided they’re over 18, they can be detained and deported and will be denied crucial safeguarding measures. 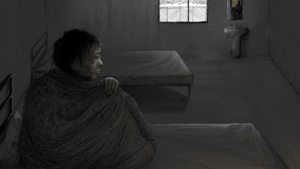 Urgent Britain once welcomed refugees – now even children arriving alone after crossing the Channel are being locked up in inhumane conditions.