Another detention centre closed and numbers at a 10 year low – does this reflects Government recognition that widespread indefinite detention is harmful and unnecessary? 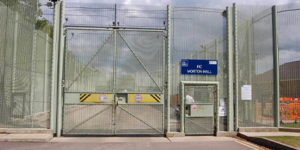 Yesterday the Government announced that Morton Hall immigration detention centre will be closed by 2021. This is an extremely welcome step which has the potential to reduce the capacity of the detention estate by nearly 400 people.

In recent months, following Detention Action’s legal challenge over COVID-19, close to 1,000 people have been released from UK immigration detention centres. These mass releases have shown just how unnecessary widespread prolonged detention really is. We hope that the decision to close Morton Hall reflects Government beginning to acknowledge this fact.

Figures from May showed just 368 people held in immigration detention, and the chance for real change is here. We hope that the decision to close Morton Hall is a sign that Government is recognising the benefits of community-based programmes over locking thousands of people up in detention centres with no due process and no limit on how long they can be held.

Until recently, around 24,000 people were being locked up indefinitely every year in immigration detention. The net is cast wide and the Home Office gets it wrong so frequently that 62% of those detained are released again. Suicide attempts and self-harm are an almost daily occurrence, and last year the longest detention stood at 1,002 days.

One thing is clear – we cannot return to the status quo. The coming months will be a crucial test of the Government’s ability to genuinely reflect on a failed policy and change course.

At Detention Action, our team supports people held in Morton Hall every day. Over the years, we have heard many tragic stories of injustice, suffering and despair from our clients and others. These issues are not specific to Morton Hall but are endemic across the detention estate.

Alex, one of our clients held in Morton Hall had this to say about the closure:

“It’s a good thing it’s being closed. In this place people live with extremely bad mental health issues. No matter the level of punishment – whether you’re being deported or not – the way they hold people for so long with no idea when they’ll be released destroys people’s mental health. Until you don’t feel human anymore”

Closing Morton Hall is a positive and welcome step, but it is not enough. In Parliament last week, Andrew Mitchell MP said of our detention system:

“The best regime in the world cannot ameliorate the fundamental injustice of a system that arbitrarily imprisons people, without time limit, solely for administrative reasons.”

This and the impassioned speeches from MPs of all political parties such as David Davis, Nadia Whittome, Yvette Cooper, and many others, in last week’s debates on the Immigration Bill are part of growing pressure on the Government to end indefinite detention. They were echoed in the House of Lords on Wednesday, when peers from a range of parties supported calls for a time limit.

We look forward to hearing further details on the planned closure of Morton Hall. We hope that this is the beginning of the end of mass indefinite detention. For our part, we promise to keep holding Government to account until the inhumane and shameful practice of indefinite immigration detention is ended once and for all.