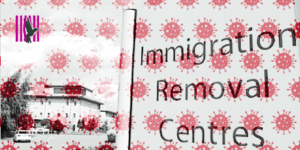 Human Rights charity Detention Action has issued a legal challenge over the Government’s failure to safeguard all those held in UK Immigration Removal Centres (IRCs) from Covid-19.

The challenge concerns the lawfulness of continued detention while global travel restrictions prevent removals from the UK, and while conditions in detention centres present a risk of serious harm and death resulting from an outbreak of Covid-19.

Detention Action is seeking the review and release of all those currently held under immigration powers and an immediate halt to further detentions.

The challenge is supported by expert evidence from Prof. Coker (Emeritus Professor of Public Health at the London School of Hygiene and Tropical Medicine) who has advised that “it is credible and plausible that 60% of immigration detainees will soon become infected with COVID-19.” In light of this, Prof. Coker recommends that detainees should, if possible, be released (for reports see note 2 below).

The challenge follows reports from Detention Action clients and others held in IRCs of widespread fear and panic amid unsanitary conditions and an almost total lack of information regarding Covid-19, both it’s risks and steps that can be taken to reduce its spread.

The challenge is brought by Detention Action and a 60-year-old man who has been detained since last June and is currently held in Morton Hall IRC. The Claimant suffers from Hypertension and is deeply concerned about his increased risk of serious illness and death from Covid-19 due to his health conditions.

Bella Sankey, Director of Detention Action, said: “The Home Office needs to show a human face: this is a public health emergency and every hour matters. The science is clear that by continuing to detain people in unsanitary conditions they risk “explosive transmission” and hundreds of lives. The world’s borders have closed and so removals are impossible – detention serves no purpose”.

Immigration detention in the UK is lawful only if there is an immediate prospect of removal from the UK. There are seven immigration detention centres across the country holding around 1500 – 2000 indefinitely at any one time, and around 24,000 in total per year. Conditions in IRCs are often unhygienic, as found by the Government’s own inquiry of July 2018 conducted by Stephen Shaw (see note 3 below) among many others.

Toufique Hossain, Director of public law at Duncan Lewis, said: “The government cannot mete out compassion selectively if it is to be considered humane. No one should be left behind. This virus does not discriminate as to who it infects and takes from loved ones, and neither should the State. There are many in detention who are vulnerable and where removal is no longer imminent. We hope a decision on suspending further detentions, and expediting the release of such people at risk of serious illness and death, is made soon by the Home Secretary.”

1. Detention Action is a national charity established in 1993 that seeks to defend the rights and improve the welfare of people in immigration detention by combining support for individuals with campaigning for policy change. Detention Action works in Harmondsworth and Colnbrook IRCs near Heathrow Airport in London, Morton Hall IRC in Lincolnshire, and with people held under immigration powers in London prisons. We work with around 1000 individuals held in detention each year.
2. Prof. Coker’s report is available here and supplementary report available here.
3. Stephen Shaw’s 2016 Review into the welfare in detention of vulnerable persons is here https://assets.publishing.service.gov.uk/government/uploads/system/uploads/attachment_data/file/490782/52532_Shaw_Review_Accessible.pdf and 2018 follow-up review is here https://assets.publishing.service.gov.uk/government/uploads/system/uploads/attachment_data/file/728376/Shaw_report_2018_Final_web_accessible.pdf
4. Detention Action is represented by Duncan Lewis Solicitors, and Ayesha Christie and Chris Buttler of Matrix Chambers.