With an historic ban on indefinite immigration detention just one vote away, here’s a reminder of why this inhumane system has to go. 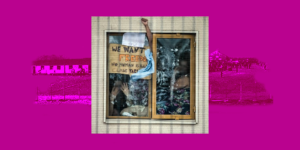 Urgent We’re one vote away from a ban on indefinite immigration detention, and public pressure could be the deciding factor.

The Government’s highly controversial policy of indefinite immigration detention has been widely criticised, and has become one of the most important human rights issues facing the country today. But the scale of this problem, and the reality of what’s going on inside the UK’s detention centres, is still not widely known.

If we were to remember just one thing about indefinite detention, it’s hard to do better than the succinctly damning words of the Home Affairs Select Committee last year[1]:

Here are the facts:

1. The scale of indefinite immigration detention is huge

Immigration detention in the UK is run on an enormous scale. There are seven detention centres around the country and approximately 24,000 people are held every year.

Possibly the most infamous centre is Brook House near Gatwick Airport. In 2017 a BBC Panorama expose showed undercover footage of vicious physical and racist abuse and neglect of those held there[2].

Possibly the most controversial aspect of detention in the UK is that there is no limit on how long people can be held. We are the only country in Europe that does this, and all the evidence shows how pointless and inhumane it is.

We see clients who are detained for weeks, months and years – and see the devastating toll this takes on both mental and physical health.

There is now an emerging consensus among MPs and experts that 28 days is a reasonable time limit for immigration detention. This year the 28-day time limit was recommended by the Home Affairs Select Committee and the Joint Committee on Human Rights.

3. The Home Office gets it wrong most of the time

The reality of who is held in immigration detention is not as simple as ‘people who should not be in the UK’. With no criteria in law for who gets detained, the next is cast wide.

As well as seeing so many incredibly vulnerable people, one of the most striking things about working in the centres is how many people with thick British accents you hear. These are people who most likely came to the UK as children, but are now being labelled as ‘foreign’ and face deportation to countries they do not know.

4. This is detention without judges or courts

Decisions to detain indefinitely are made by Home Office officials, and it can be months before someone gets to see a judge.

The problem is that the government doesn’t have legal criteria for who gets put in immigration detention and all the decisions are made by the Home Office – which has led to thousands being detained for no reason. The Home Office so frequently gets it wrong that the majority of people it detains are released and it has paid out millions for unlawfully detaining people.

… a serious lack of judicial oversight of the decision to detain. Decisions to hold an individual in immigration detention are taken by Home Office officials and not by a Judge or court.[4]

5. Indefinite detention is not an issue of the left or right

Fixing our broken immigration detention system is not an issue of any particular political party. It’s about human beings and human rights, due process and justice. MPs from across Parliament have joined forces in condemning indefinite detention, and calling for a time limit of 28 days.

Now, after all our campaigning, support among MPs for ending all indefinite immigration detention has never been so high across the major parties. We have put this issue firmly on the map, and those in charge have paid attention.

Here’s how MPs have described indefinite detention in Parliament recently.

6. There is a crisis of harm in UK detention centres

A recent independent report revealed a surge in self-harm in Morton Hall immigration detention centre. Inspectors found a 20% increase in self-harm incidents, despite a drop in the number of people held there.[5]

A crisis of harm is unfolding in UK detention centres. This includes serious physical and mental health problems, suicide, and an epidemic of self-harm, which has become a daily occurrence. This is unacceptable, but an inevitable consequence of detaining vulnerable people indefinitely.

7. A huge waste of money

The total cost of this UK’s system of indefinite immigration detention is currently £108 million per year. In addition, it was revealed last year that the Home Office paid out £21m in just five years for wrongfully detaining 850 people.

Recent analysis by Liberty and Cambridge Econometrics revealed that a 28-day time limit for immigration detention could save the taxpayer up to £35million per year[6].