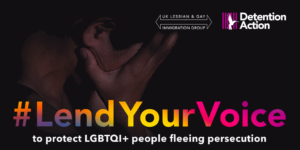 LGBTQI+ people fleeing persecution and violence deserve to be treated with dignity and respect – not locked up in detention centres.

LGBTQI+ people are particularly vulnerable in immigration detention. They’re exposed to abuse, bullying and harassment for indefinite periods of time.

To make more politicians pay attention, and to stop these injustices, we all need to use our voices to raise the alarm. The more of us there are, the stronger our call will be.

This is an urgent national campaign from Detention Action and the UK Lesbian & Gay Immigration Group (UKLGIG) – the first of its kind highlighting the desperate situation faced by LGBTQI+ people in indefinite detention.

More to come on this campaign soon, including 28 celebrities who have lent their voice to tell the stories of those who are silenced.