Laid bare – the human and financial cost of indefinite detention 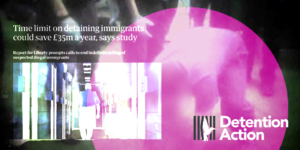 The Home Office has been in court over serious abuse in immigration detention and a study found that we could save £35million with a 28-day time limit.

The human and financial cost of immigration detention has been laid bare in recent weeks, yet the Home Office still says that the call for reform “rests mainly on slogans rather than evidence.”

Here’s an update on what’s been happening:

In court, we hear accounts of abuse in immigration detention – violence, racism, mocking and indifference to suffering. The judge listens intently.

We’re there because two victims of the abuse in Brook House detention centre uncovered by the BBC’s Panorama programme are mounting a legal challenge against the Home Office.

Grim details regularly punctuate the legal arguments, reminding everyone of why this is so important. We hear that the evidence indicates the existence of “extensive, repeated and serious abuse, ill-treatment and bullying of vulnerable detainees, including assaults (carried out by staff for reasons of punishment, control and, perhaps most alarmingly, pleasure), threats (including to kill), deliberate humiliation, verbal abuse (including racist abuse), and failures to protect vulnerable and mentally ill detainees and detainees who may be children.” We hear that this mistreatment took place openly over a significant period of time, yet no member of staff reported it.

Abuse of such seriousness and scale, the victims argue, needs an inquiry that lives up to the UK’s obligations under Article 3 of the European Convention on Human Rights, the prohibition on torture and inhuman or degrading treatment or punishment.

Assaults (carried out by staff for reasons of punishment, control and, perhaps most alarmingly, pleasure)

The Equality and Human Rights Commission supports the challenge, but the Home Office is still fighting. We hope to get a judgement in the coming months – certainly more to come on that soon.

Meanwhile, a study found that the 28-day time limit on immigration detention we’ve all been campaigning for could save £35 million per year.

The study, commissioned by Liberty and conducted by an economic data consultancy firm, analysed the costs of detention (£108m last year) against potential savings that could be achieved with a 28-day time limit and alternatives to detention such as the Community Support Project that Detention Action have been running since 2014.

“On a per-day basis, this form of alternative provision is around one-tenth the cost of immigration detention” the study finds. It’s a powerful argument for less detention and more alternatives – supporting people subject to immigration control to live in the community and resolve their cases, rather than locking them up indefinitely.

People often ask what will happen if people are not locked up in detention centres, and this is the answer.

People often ask what will happen if people are not locked up in detention centres, and this is the answer. It’s humane, effective and can cost £35 million less than indefinite detention.

Pressure is mounting on Government. The human cost of indefinite detention has never been shown so clearly as it was in Panorama’s expose. And now the financial case for replacing detention with alternatives is clearly demonstrated.

With over 25,000 people still held in immigration detention every year, and growing criticism of a system which allows the Home Office to imprison people indefinitely, the need for action has never been more urgent. We must have a credible inquiry into the abuse that happened at Brook House, and an end to the fundamentally inhumane and wasteful system of indefinite detention that led to it.