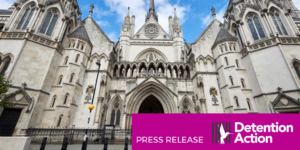 The High Court will today hear a legal challenge over the government’s response to detainee abuse at Brook House Immigration Removal Centre uncovered by the BBC’s Panorama programme in 2017. The case will be heard on Thursday and Friday of this week in the High Court of Justice.

The case is brought by two victims of abuse at Brook House – MA, represented by Duncan Lewis Solicitors, and BB, represented by Deighton Pierce Glynn. The two are challenging the decision by the Home Office to commission an investigation by the Prisons and Probation Ombudsman (PPO), arguing that abuse of such seriousness and scale requires a full inquiry, instituted under the Inquiries Act 2005 and compliant with the UK’s obligations under Article 3 of the European Convention on Human Rights, the prohibition of torture and inhuman or degrading treatment or punishment.

The Equality and Human Rights Commission has intervened in the case in support of the Claimants’ arguments.

The proposed investigation by the PPO was announced in haste only after the court granted MA and BB permission in May 2018 to challenge the government’s outright rejection of calls for in independent inquiry.

MA and BB argue that the proposed PPO investigation would not comply with the UK’s obligations under Article 3. Crucially, it would not have the power to compel witnesses to attend, would not allow for questioning of witnesses to resolve disputes of fact, and would not adequately involve the victims by providing funding for legal representation.

Bella Sankey, Director of Detention Action said: “The BBC’s Panorama documentary exposed serious and widespread abuse at Brook House immigration detention centre. Now, with 25,000 people still held in immigration detention every year, and growing cross party criticism of a system which allows the Home Office to imprison people indefinitely, the need for action has never been more urgent. We must have a credible inquiry into the Brook House abuse and an end to the fundamentally inhumane system of indefinite detention that led to it.”

For further information, contact Matthew Leidecker on 097950387130 or matthew@detentionaction.org.uk.