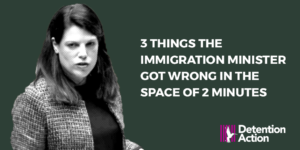 Immigration Minister Caroline Nokes was at the debate – here are three things she got very wrong and why:

1. “A time limit is not only unnecessary but would severely limit our ability to use detention as an effective means of enabling removal.”

MPs including Conservative David Davis have described detention with no time limit as a ‘national shame’. A few points on this:

The Home Office’s own guidance sets four weeks as the standard for time in detention while cases are death with.

But this standard is not met for more than 10,000 people every year. The system is ineffective, inhumane and expensive. A time limit would ensure that detention is only used when it is necessary.

Urgent – 25,000 people held every year in UK immigration detention centres with no time limit. Unaccountable, arbitrary, indefinite detention is a human rights abuse. Join the movement to end it.

“Folk do not know how long they are being detained for; that is what is harmful… There is indefinite detention—this is surely a matter of semantics.”
Stuart C. McDonald MP

2. “It would encourage those who might seek to frustrate the removal process and run down the clock until the time limit is reached.”

The main point here is that there should be no ‘clock’ to run down – detention should only be used once the Home Office has created a real prospect of imminent removal, otherwise we’re just detaining people for no reason only to release them again, which is what currently happens in 56% of cases.

“Does [The Minister] note that the Bar Council recommends a 28-day time limit?”
Paul Blomfield MP

When we ended the indefinite detention and children and pregnant women in the UK, our immigration controls were not undermined – it actually had a positive effect on the work of the immigration service.

3. “The main rationale put forward in support of a time limit is that, in the absence of one, individuals are detained indefinitely, but that is simply not the case, as the law does not permit indefinite detention.”

Indefinite means ‘lasting for an unknown or unstated length of time’. There is no release date for immigration detainees, and those who have experienced it describe it as ‘mental torture’. More than 10,000 people are detained every year for longer than the proposed time limit of 28 days.

The time limit is supported for by many Conservative and DUP MPs and the Opposition frontbenches, as well as the Joint Committee on Human Rights, the Bar Council, the Equality & Human Rights Commission, the Law Society, The British Medical Association, and more than 25 of the country’s leading NGOs.

The arguments put forward include:

Urgent – 25,000 people held every year in UK immigration detention centres with no time limit. Unaccountable, arbitrary, indefinite detention is a human rights abuse. Join the movement to end it.