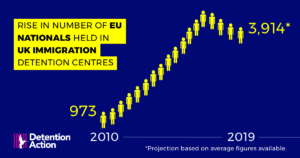 Today marks the official start of Brexit. EU citizens living in the UK are being told by politicians that they are our friends, family and neighbours. They are told that their rights will be protected. But scratch the surface and a darker, far less certain picture emerges.

Currently, EU citizens living in the UK can only be targeted for immigration control if they are found not to be exercising ‘treaty rights,’  but that can mean anything from being out of work to having committed a criminal offence, or if deportation is considered in the ‘public interest’. In the past EU citizens sleeping rough on the streets have been targeted for detention and deportation.

Although this won’t change until the end of the transition period – currently set as 31st December 2020 – it is undeniable that there has already been a spike in EU citizens being detained, deported, and denied access to services in the UK.

Now, in 2020, with the government’s scheme for securing EU citizens faltering, and laws requiring proof of status in order to access vital services and housing already widespread, many are deeply concerned for what is yet to come following Brexit.

Here are 4 things you should know about the UK’s treatment of EU citizens:

1. Thousands of EU citizens are already being targeted for detention and deportation – after Brexit, this may increase dramatically

Over the past decade, thousands of EU citizens have been subjected to the government’s controversial policy of indefinite immigration detention.

European citizens are already being detained in increasingly large numbers, and there is widespread concern about what will happen following Brexit – when free movement ends and EU citizens become subject to the UK’s ‘hostile environment‘.

Very little legal protection exists around immigration detention, and this should worry EU citizens living in the UK. There are no legal criteria for who gets detained and in what circumstances, and no limit on how long the government can hold a person. Decisions to detain indefinitely are made simply by Home Office caseworkers, and those held may not get in front of a judge for months. At Detention Action we see clients languishing in detention for months and sometimes years on end – taken from their families and communities without warning.

Take the example of one of Detention Action’s European clients – a highly vulnerable survivor of abuse who was held in detention for almost a year. Because he’s an EU citizen, he was unable to claim asylum accommodation – a common route out of detention for those with no fixed address. He was severely unwell, and when he was eventually released was unable to even register for a GP and seek treatment for the mental health problems that had been so aggravated by his year in detention.

Issues with things like accommodation and documentation can devastate the lives of people being targeted for detention and deportation. We’re expecting European citizens to encounter them a lot more after Brexit. The risk to potentially hundreds of thousands of EU citizens is very real.

Even before Brexit was certain, the Home Office had begun targeting European citizens for detention and deportation. Two secretive operations launched by the Home Office between 2015 and 2017 deployed immigration officers to target vulnerable EU citizens who were thought to be sleeping rough around the UK.

Detention Action worked with many people detained under this policy. Some were suicidal or had other severe mental health problems. Many had lived and worked in the UK for years, and had been rough sleeping between pay cheques or houses when they found themselves in the wrong place at the wrong time. This could happen to anyone, but instead of being given the help they needed, they were sent to detention centres or deported, along with hundreds of others.

These operations were ruled unlawful by the High Court in 2017[2] and the Home Office has been ordered to pay thousands of pounds in damages to some of the people it deported. But this was too late for the man who took his life in 2017 after being detained while sleeping rough, one of three EU nationals who took their lives in detention that year.[3]

The government could take this as a warning, and ensure an effective service for regularising EU citizens’ status, but as we’ll see below, this is not the case.

3. The system for securing EU citizen’s rights is in deep trouble

While thousands of EU nationals are being sent to detention centres and many others being targeted by UK immigration or asked to prove their status when accessing services, the system for securing their rights is not going well.

The troubled Settled Status Scheme – the government’s system for EU citizens living in the UK to secure their rights – has been plagued with problems from the beginning. Recent reports suggest that 900,000 people are yet to apply, with over 1 million being granted only the weaker ‘Pre-Settled Status.”[4]

The scheme has a backlog of applications reaching the hundreds of thousands, and reports of problems with access and unfair refusals are rife.

What does all this mean? It means that hundreds of thousands of people risk becoming undocumented migrants after Britain leaves the EU and therefore subject to a hostile environment that we know has already targeted them for detention and deportation.

4. We could be facing another Windrush Scandal – on an enormous scale

The Windrush scandal showed us what can happen to people when they are subjected to hostile environment measures. Thousands who had the right to be in the UK, and had lived and worked here for decades, were suddenly told they were in the UK illegally. Detention, deportation and problems accessing healthcare, housing, work and education followed with devastating consequences, still being felt acutely to this day.

If this sounds familiar it’s because this is happening to some European citizens even before the UK has even left the EU.

Make no mistake – some EU citizens are already being subjected to the hostile environment. There is clear consensus that EU citizens’ rights could be the next Windrush scandal, but on a much larger scale.

The 3Million is an expert NGO dedicated to providing support and information to EU citizens living in the UK – you can find their website here.

Here for Good are a charitable organisation aiming to improve legal advice for EU citizens. Find out more here.

JCWI are also providing advice and support to EU citizens in the UK, and you can find out all about it here.