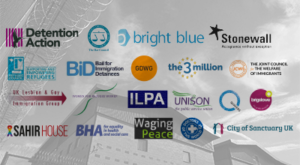 We are a group of leading UK NGOs and organisations, writing to you as the 2020 Immigration Bill seeks to implement the biggest change to our immigration system in a generation. We believe that this is an opportunity to put right a long-standing injustice at the heart of our system – the practice of indefinite immigration detention.

We draw your attention to the cross party Time Limit on Immigration Detention Amendment tabled to the Immigration and Social Security (EU Withdrawal) Bill by David Davis MP and supported MPs across Parliament. This Amendment seeks to bring indefinite immigration detention in the UK to an end, replacing it with a package of measures including a 28-day maximum time limit and automatic judicial oversight.

This amendment will be debated today. We ask that you consider the weight of evidence and breadth of consensus on this vital issue, and support the 28-day time limit for all on immigration detention.

An overwhelming body of evidence has emerged in favour of reform to our detention system. In 2015 Stephen Shaw, the former prison ombudsman, concluded in his review of our detention system that “[t]here is too much detention; detention is not a particularly effective means of ensuring that those with no right to remain do in fact leave the UK.”

In 2019 longest detention stood at 1,002 days and the error rate of our detention system was 62% – meaning that the vast majority of those taken into detention were eventually released back into the community.

In recommending a time limit of 28 days, the Home Affairs Select Committee noted in its 2019 report that “[w]hile
the indefinite nature of detention traumatises those who are being held, it also means that there is no pressure on the Home Office to make swift decisions on individuals’ cases.”

Last year the Joint Committee on Human Rights and HM Inspector of Prisons also carefully examined the operation of our detention system and called for a time limit. In addition, analysis by Liberty and Cambridge Econometrics found that a 28-day time limit would save the taxpayer £35million per year.

As a country we have the right to enforce our immigration rules. These measures bring to an end practices that are not only inhumane but have cast the net far too wide, costing millions in taxpayers’ money while delivering exceptionally poor results.

Until the Covid-19 crisis hit, 24,000 people were detained every year for immigration purposes for periods ranging from days to more than four years. The Covid crisis has now demonstrated just how unnecessary prolonged detention is, with close to 1,000 people having been released in a matter of weeks, mostly back to their families in the UK or to approved accommodation.

Our system of indefinite immigration detention has proved highly controversial and highly ineffective over many years, and it is time it was brought to an end with sensible reform. The UK has a proud history of protecting fundamental rights and universal values, and of standing for justice, fairness and equality under the law. We believe that these values transcend political allegiances, as shown by the cross-party nature of the call for a time limit on immigration detention.

We ask that you consider the weight of evidence and breadth of consensus on this vital issue, and support the 28-day time limit for all during today’s debate.

You can also see the letter here.