Anything to be proud of?

How Boris Johnson and Priti Patel are failing LGBTQI+ people in detention. 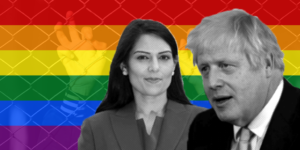 During his leadership campaign, Boris Johnson released a statement outlining his policies and beliefs on issues affecting LGBTQI+ people. It began with his ‘guiding principle’ – that ‘who you love, who you are, how you choose to live, should not and will not stand in your way.’ [1] It’s a welcome sentiment, but one that’s hard to recognise in our country’s treatment of those who seek safety here after fleeing persecution because of their sexuality or gender identity, particularly when it comes to the indefinite detention of LGBTQI+ asylum seekers.

After coming to power in July, Boris Johnson appointed Priti Patel as Home Secretary. Priti Patel has often voted against equal rights for the LGBTQI+ and migrant communities [2], including voting against equal marriage.

During Pride month this August, the Home Office used the Pride colours to decorate its social media feeds. Just six days after Pride month ended, it rejected urgent calls from the Home Affairs Select Committee for official recognition that LGBTQI+ people are vulnerable in immigration detention. It also rejected calls for basic legal protections such as a limit to how long people can be held in detention, and criteria for who should be locked up in the first place.

The government’s controversial policy of indefinite immigration detention has come in for heavy criticism recently, much of which centres around the lack of legal safeguards for those detained and the number of vulnerable people found in UK detention centres.

25,000 people are locked up in UK immigration detention centres every year for unlimited periods of time. Many are exceptionally vulnerable people, such as torture and human trafficking survivors, and should not be there in the first place. The majority are eventually released, after weeks or months or years. Their immigration cases continue while they live in the community; their detention having often caused immense harm but served no purpose.

Between 2016 and 2018, the Home Office refused 3,100 asylum claims from LGBTQI+ people seeking protection from countries where same-sex acts are criminalised [3]. We do not know how many LGBTQI+ people are in UK detention centres as the Home Office does not keep statistics (another recommendation it recently rejected, while agreeing it was something that should be ‘considered’). But we do know that people whose asylum claims have been rejected make up a significant proportion of the detained population, and face being sent back to countries where their lives are at risk.

In other words, the stakes are high…

In other words, the stakes are high, and it’s very difficult for LGBTQI+ people to be recognised as refugees who deserve protection – figures show that just one in five claims are successful. [4]

But if making a successful asylum claim is difficult for LGBTQI+ people who are not in immigration detention, it becomes almost impossible for those who are. The little ‘evidence’ people might have of their sexual or gender identity often relies on testimony from friends, family, or community members. An important feature of detention centres is their ability to isolate those held there. All social media and smartphones are banned, making it much harder for LGBTQI+ people to reach vital contacts for their case.

Practical issues like this are compounded by the emotional impacts of detention. LGBTQI+ people might have already been subjected to violence and torture because of their sexual or gender identity, and are placed in detention centres where being LGBTQI+ puts them at high risk of abuse [5].

If we were to come up with a ‘guiding principle’ it probably wouldn’t look like any of this.

If we were to come up with a ‘guiding principle’ for the treatment of LGBTQI+ people fleeing persecution it probably wouldn’t look like any of this. It would recognise that LGBTQI+ people are having to leave their homes to escape criminality, violence and persecution because of who they are. It would say that we shouldn’t be locking people up indefinitely once they reach what they thought was a safe place, or sending people back to countries where their lives are at risk. It would recognise that the idea of having to ‘prove’ sexuality or gender identity is highly problematic, and that we can and must do better than the reliance on “stereotypes embedded in prejudice” [6] and “culture of disbelief” that still blight our system [7].

At the very least, a guiding principle would recognise that basic legal protections like a limit on how long LGBTQI+ asylum seekers, or anyone, can be locked up in an immigration detention centre is fundamental to any system that seeks respect human rights and treat people with dignity and fairness. Boris Johnson promised to ‘continue to champion a Government which believes in equality, fairness and freedom to love for all’. Instead, his Home Secretary continues to detain and deport LGBTQI+ people who ask for our protection, while her office attempts to hide behind the Pride flag. The Prime Minister has previously boasted that the UK “leads the world” in LGBTQI+ equality. If he is truly committed to this, he must urgently reform the detention system to avoid further harm to LGBTQI+ community members held there [8].