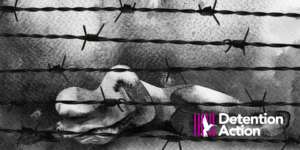 This week, a report by the Independent Monitoring Board revealed a surge in self-harm in Morton Hall immigration detention centre. Inspectors found a 20% increase in self-harm incidents, despite a drop in the number of people held there (overall, the UK is set to detain around 24,000 people for the second year running).

The findings are extremely worrying. Tragically, though, they reflect the desperate experiences of our clients in Morton Hall and other detention centres. Indefinite detention, ongoing detention with no limit on how long it can last, has a devastating effect on people’s mental health – approaching half of our clients so far this year have reported serious mental health problems.

“The effect…was mental torture to me. I suffered a lot over my two and a half years in detention. And I saw others around me falling to pieces. I saw people self harming. I saw someone set fire to them self because they’d lost all hope.”
– Freed Voices Member

Many detained people have already experienced trauma before entering detention, including past torture or human trafficking, and detention is known to exacerbate pre-existing mental health problems. But mentally well people also report entering detention and experiencing mental distress. This is often attributed to the uncertainty of when they might leave, and the constant threat of removal from the UK, among many other issues.

Around the country, mental health services are overstretched and underfunded, and things are no different in detention. Due to the amount of people in acute distress and needing support, waiting lists are long. Often people can wait weeks or months for an appointment with a mental health professional.

These appointments can be key for supporting an individual’s mental health, as well as identifying whether someone is at particular risk of harm from detention. To add to the problems caused by an overcrowded system, the government’s policy for identifying people who might be harmed by detention is fundamentally flawed.

Those assessed as being ‘Adults at Risk’ are often kept in detention anyway, simply on the say-so of a Home Office caseworker. Essentially the Home Office is being allowed to mark its own homework, and thousands of exceptionally vulnerable people continue to be detained as a result.

Self-harm in detention is something we deal with every day and it’s heart-breaking. One of the hardest parts of working with those held in immigration detention is watching them deteriorate, seeing the clear impact that the indefinite nature of their detention is having.

This week’s report is the latest in a string of reports this year highlighting significant problems with the UK’s system of indefinite detention. As long as this system continues, as long as we have no limit on how long people can be held in detention and little in the way of independent oversight or safeguards, it is hard to see how these problems will end.