×
/ News / I was in indefinite detention

I was in indefinite detention

I’m a member of Freed Voices. We’re a group of experts-by-experience who speak about the realities of detention and call for reform.

Back in November, I gave evidence to the Joint Committee on Human Rights. I told them that I left my county of birth at the age of four, and arrived in the UK aged 12. I told them that I dropped out of school to look after my siblings after our father left us. I told them about how I was denied the documents to work in the only country I knew as home, so I began working using someone else’s ID to get employment.

For this crime I was sentenced to 20 months in prison. I had worked hard to support my family and paid taxes. I take responsibility for my actions and feel that I repaid my debt to society. But I do not accept what happened next.

The day before I was supposed to be released, I was told that I would not be released at all. Instead, I would be indefinitely detained pending deportation.

Urgent – 27,000 people held every year in UK immigration detention centres with no time limit. Unaccountable, arbitrary, indefinite detention is a human rights abuse. Join the movement to end it.

I grew up in east London. I’d had trials for West Ham football club. Now I was in immigration detention. The next two and a half years were very tough. Then I was released. My detention had caused immense harm, and had served no purpose.

My story is not isolated and it’s not a special case. I have met many people who faced similar injustices. Each had experienced the trauma of being detained without a time limit. Many had been affected by the crisis of harm that is endemic in immigration detention – serious mental and physical health problems, suicide, self-harm.

Somewhere along the line it was decided that some people were less deserving of basic human rights and fair treatment.

So we started throwing migrants into detention centres, with no courts and no time limit. Of course, this included people who had lived here most of their lives and assumed Britain was home.

People are now coming round to the idea that this is wrong. But many are still saying that indefinite detention is okay for some particular reason, or some particular group – picking and choosing who deserves rights and fair treatment, and who doesn’t.

I see that as picking and choosing who is human.

If human rights are to mean anything then they must be applied universally. You cannot pick and choose who deserves them. Indefinite detention is indefensible in any circumstance. It’s time for it to end. 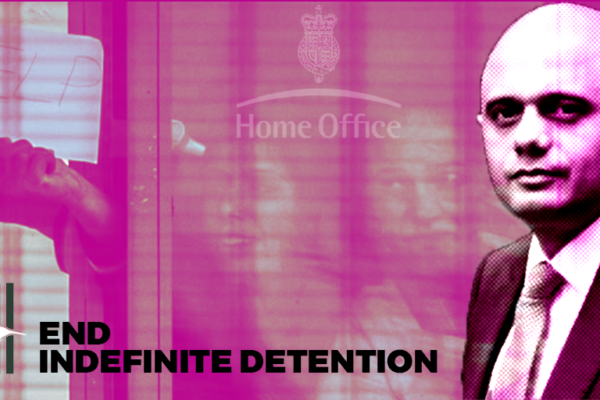 Indefinite immigration detention is a shocking human rights abuse that’s happening on a huge scale right here in the UK….